Where everyone is welcome! 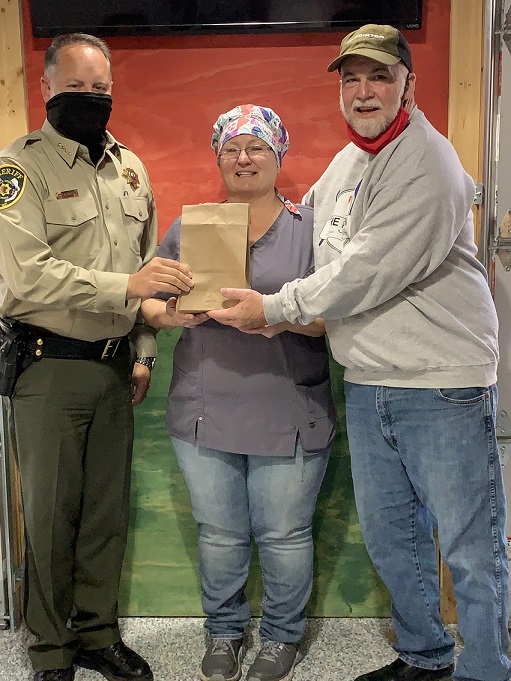 December 2, 2020 - Rural Byron resident Mark Schwendau stopped by The Kitchen Table Inc. this week to donate 100 meals to give thanks to the Ogle County Sheriff's Department - a $500 donation! Schwendau had county sheriffs perform two different wellness checks on him this year due to false alarms. This donation is intended to introduce Ogle County Sheriff's deputies and their families to Illinois' first community cafe, the Kitchen Table at Rochelle. Schwendau said, "We all need to give thanks to our local law enforcement in these uncertain times!" 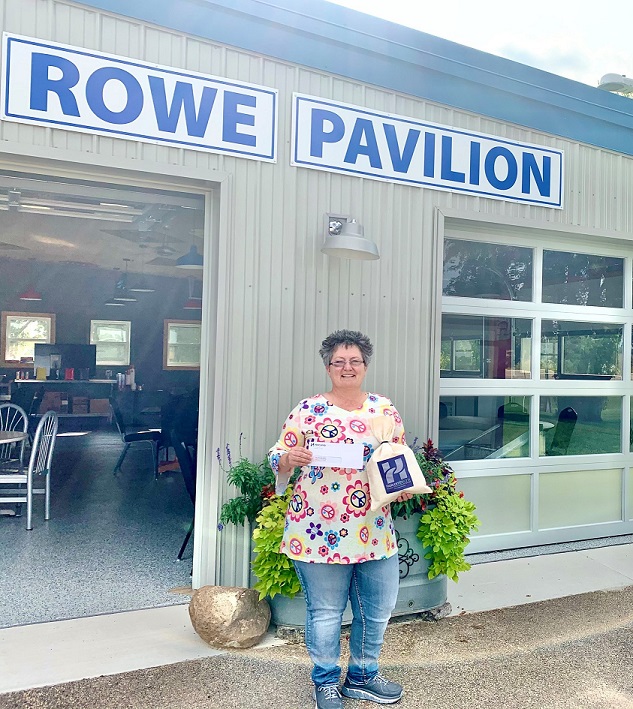 September 18, 2020 - Holcomb Bank stopped by The Kitchen Table Inc. this week to deliver some good news - a $5,000 donation! Holcomb Bank is proud to support our communities and realize the need is so much greater now. This donation will help Carolyn Brown and her crew continue to help those who need it. Holcomb Bank says, "Thank you for all you do in this community!" 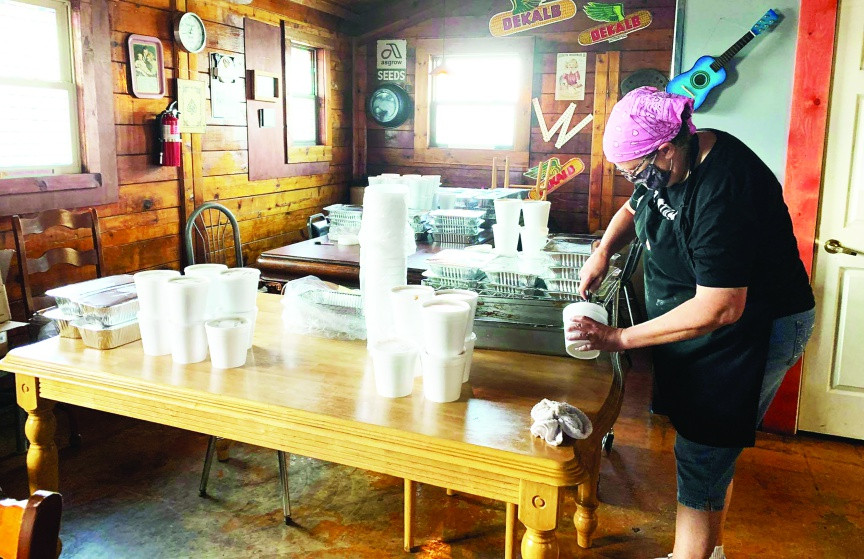 May 2020 - The Kitchen Table received Stillman Bank’s "Stronger Together" campaign award due to their efforts during the COVID pandemic. You can learn more about this charitable effort of Stillman Bank as well as others who won this award HERE.

April 21, 2020 - We're excited to be sponsored by Shane Huber, State Farm, on "Quotes for Good" program. Our goal is to raise $1,000 by teaming up with local State Farm agent Shane Huber. For every household we send their way, who completes a quote from April 21st to May 31st, they will be making donations towards our goal. Give them a call at 815-562-7011, and don't forget to mention Quotes for Good to help us reach our goal. Due to COVID-19 all requests for quotes must be called in as the office is currently closed. Please refer friends and family to help support the Kithcen Table! State Farm Insurance was part of our Friday Food giveaway on Friday May 15th. 2020! * Cannot be a current State Farm customer. 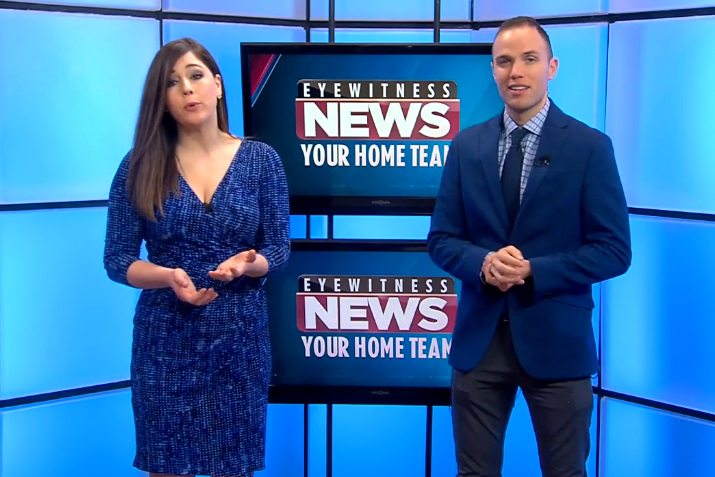 Rochelle 'Pay What You Can' Restaurant Named 'Cafe of the Year'

January 31, 2020 - The Kitchen Table again made the local television News with WTVO Channel 17 and WQRF 39 of Rockford. The story featured the Kitchen Table being named Cafe of the Year by the One World Everybody Eats Organzation. You can view this story onlineHERE. 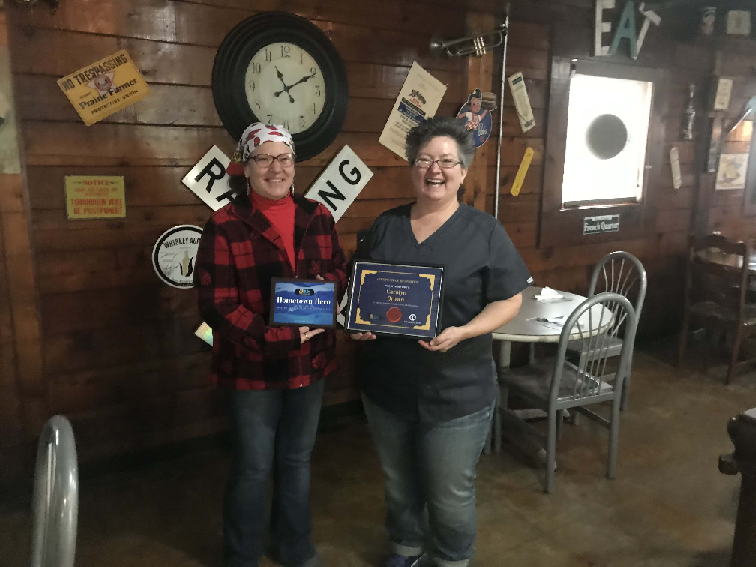 Mike and the team are in Rochelle, Illinois to break bread with Carolyn Brown, owner of "The Kitchen Table" a pay-what-you-can restaurant that provides home-cooked meals to folks in her community that have fallen on hard times.

July 22, 2019 at 8:00 p.m. central time was the original air date of Mike Rowe's "Returning the Favor" steaming Internet show available on Facebook. Over 160,000 people viewed the opening airing. Mike awarded $50,000 to The Kitchen Table to expand the building to serve more diners. 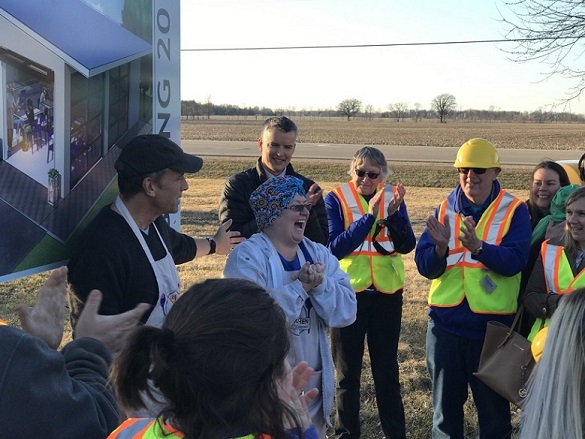 The recorded session on The Kitchen Table of the Mike Rowe 'Returning the Favor' show is set to air on Jully 22nd, of 2019 via Facebook at 8:00 p.m. and the Mike Rowe website of the Internet. The Rochelle News Leader newspaper reports this mile mark of The Kitchen Table as well as the back story of this very exciting development on July 6th, HERE. 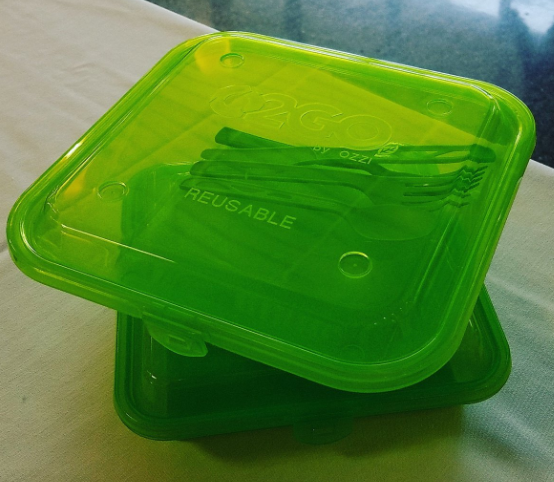 The Kitchen Table is Going Green in 2019!

At the June 10 of 2019 board meeting the board decided to go green by no longer using styrofoam containers for take out dinners. Patrons will now buy an OZZI three compartment meal box for $5 which they will bring back to the Kitchen Table for continued use. More details will be coming but it is to be noted the cost of these boxes does not reflect any profit for the Kitchen Table. Patrons will pay what the Kitchen Table pays for them. No decision has been made about seperate dessert boxes as of yet. 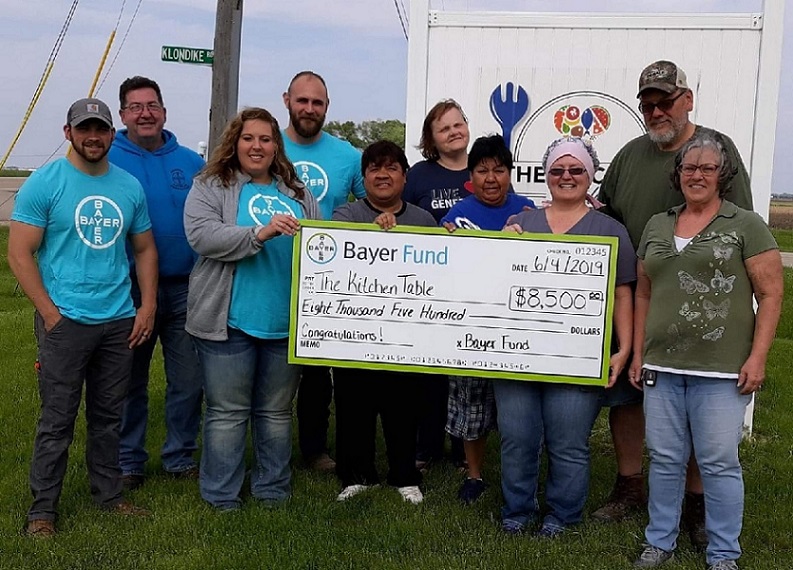 On June 4th of 2019 the Kitchen Table was awarded a grant by Bayer-Monsanto to make kitchen improvements to keep pace with the ever increasing demands imposed on the Kitchen Table by the public. The grant will be used to make some upgrades in the kitchen which will include a new stove as the current one runs with hot spots and cold spots and has oven doors that do not shut properly all the time. Our next stove will be a new stove and not a previously owned one. 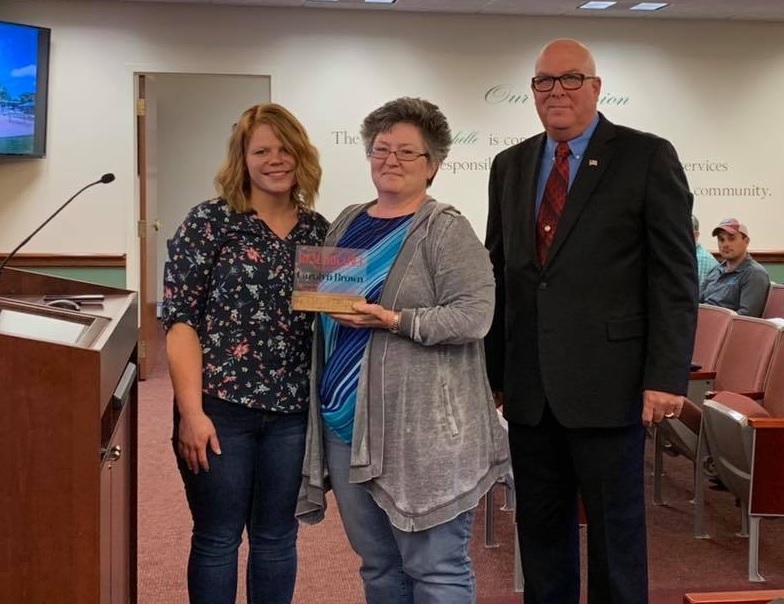 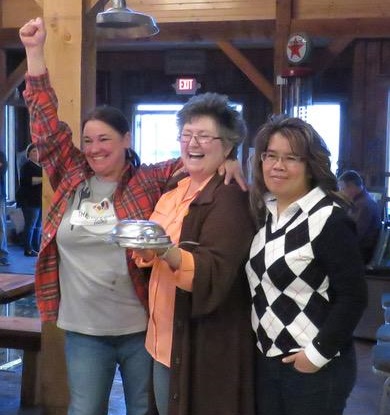 The Kitchen Table Wins in What's Cookin 2019 Side Dish Category!

On April 13th of 2019 the Kitchen Table had cooking crew attend the What's Cookin fundraiser for the Rock River Center at Barnicopia in Polo. The Kitchen Table won an award for one of the best side dishes! Photo courtesy of "The Ogle County Life" newspaper. You can read more online HERE. 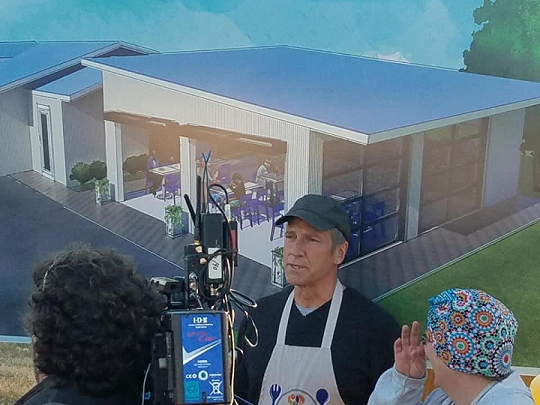 The Kitchen Table to be Featured in a Returning the Favor Episode!

On March 21st of 2019 the Kitchen Table had a New York film crew come visit to shoot a future episode of Mike Rowe's show, "Returning the Favor". Mike donated $50,000 for a new dining hall to be added to the existing Kitchen Table building. Stay tuned for further results! The addition is to begin this spring of 2019! See our Donate page for another picture from this day. See the Mike Rowe Facebook page for "Returning the Favor" to catch past and future episodes online HERE.

On December 20th of 2018 the Kitchen Table was covered in an article in Northwest Quarterly by writer and KT board member Mark Schwendau. You can read this HERE. 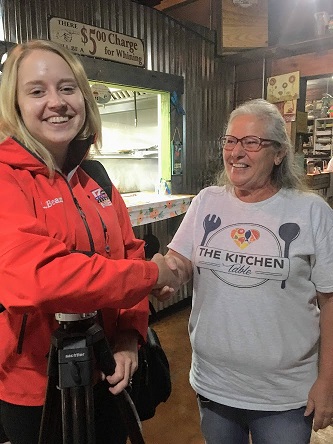 On August 31 of 2018 the Kitchen Table was featured as a "Stateline Strong" news strory by Emily Waldren on WTVO. You can see her report HERE. 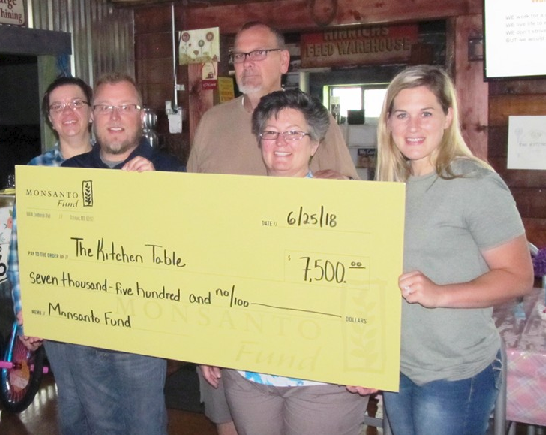 The Kitchen Table receives a grant to purchase a new walk-in freezer!

On June 25 of 2018 the Kitchen Table recieved a grant from the Monsanto Fund for their walk-in freezer. You can read this HERE.

On February 8 of 2018 the Kitchen Table's Director, Carolyn Brown, was honored as an "Insipring 815" honoree. You can read this piece on her HERE. 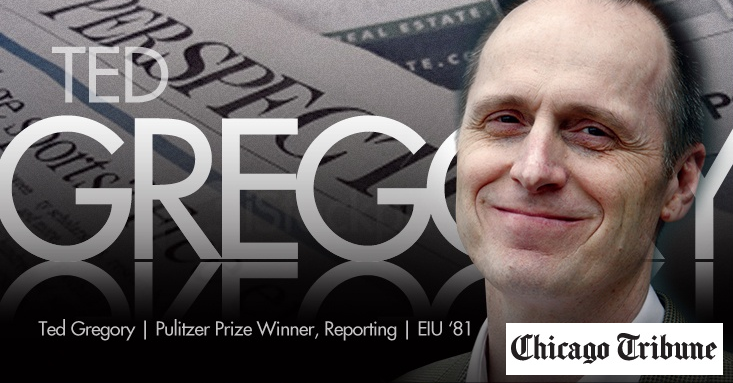 On November 23 of 2017 the Kitchen Table was honored to have thier story told by the Chicago Tribue reporter Ted Gregory on Thanksgiving day. You can read his piece he wrote on us HERE.

On July 6 of 2016 the Kitchen Table was honored to have Rockford's Country Q98.5 reporter Susan Tyler do a story on our opening week. You can read the piece she wrote on us HERE. 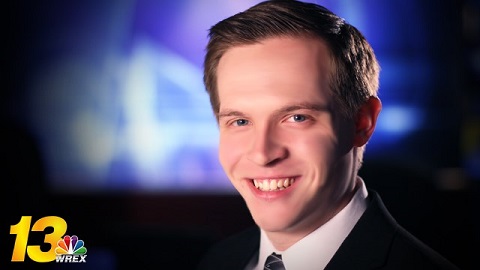 On July 6 of 2016 the Kitchen Table was honored to have WREX reporter Rueben Jones come from Rockford to do the first television story on the Kitchen Table. You can go visit their webpage to see the story HERE.

On October 20 6 of 2015 the Kitchen Table was featured in a story by the Rochelle News Leader annoucning our Open House of the Kitchen Table to show the progress we were making. You can go visit their webpage to see the story HERE. 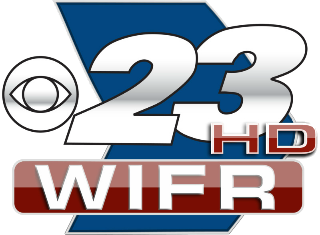 On July 27 of 2014 the Kitchen Table made its first television appearance on WIFR of Rockford came down to Rochelle to film progress on the building and attend our second community FUNdraiser! You can go visit their webpage to see the story HERE.

In the very early days before the cafe was even open (2014 and 2015), we had cafe fundraisers where live music was the main course!